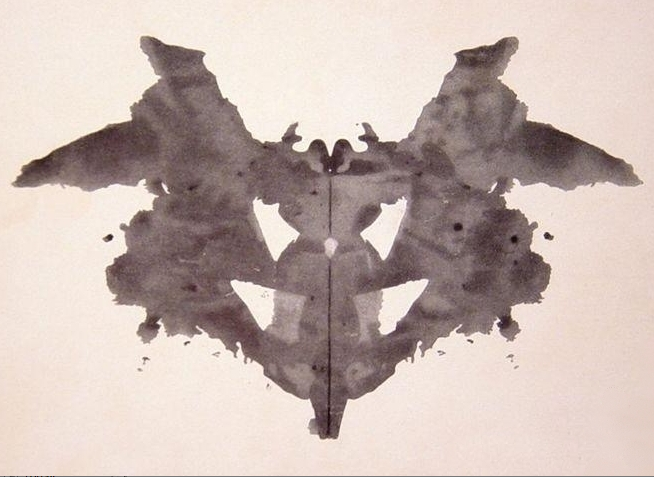 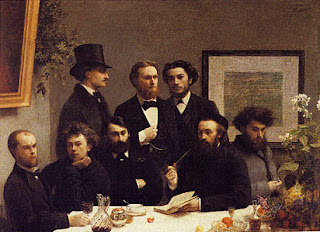 (The first paragraph was read with tongue in cheek. -Toby)

I want to show you a picture, a detail from a painting from 1872 by Henri Fantin-Latour called ‘Le Coin de Table’. The detail, obviously, is of Arthur Rimbaud, sitting, though you can’t see it here, with Paul Verlaine, who would not long afterwards take a pot-shot at him. Now, I ask you, is that Toby or not? When Toby first came to see me about a possible Doctorate of Arts we went to the Courtyard Café for coffee and I asked him what he was proposing to write about. He said he wanted to write about Rimbaud. I looked at him and I thought to myself, what else could he have chosen?

Now to read something:

That’s not Toby, but Guillaume Apollinaire. I’ve already, on the back of this book, called Toby the Apollinaire of Avalon. Let me tell you a little about why. Amongst many other things, Apollinaire wrote a poem called ‘Zone’. A famous poem, about wandering the streets of Paris after the loss of his lover. And straight away, opening Toby’s book, there are images which remind me of Apollinaire’s opening lines (‘O Eiffel tower whose flock of bridges bleats at the morning’). But it’s not just that. This week you may have seen photographs, fresh from their publication in the LA Times, of US soldiers posing beside the dismembered corpses of Taliban suicide bombers. Hold the thought because I don’t want you to slip as lightly over my use of the word dismemberment as you might otherwise have done. Words can deaden with use, or be blunted and stripped of their power by the context in which they come to us. The context here, for example, is the launch of a collection of poetry. It’s in an art gallery. The words, at present, are coming from a poet/editor/novelist/ academic. All things – parts of a context – which can deaden. I’ve always been curious about the dismembering of Orpheus. That other part of the story. He loses Eurydice, goes down to Hades to find her, loses her again in the process of bringing her back. But later is torn apart – dis-membered – by a group of women followers of Dionysius. For a long time I’d heard or read that with a kind of mythic distance. Deadened by context. A myth. Ancient. Classic. Etcetera. But lately I’ve come to understand the myth of Orpheus differently. Forgive me if this has always been obvious to you; it’s only just become obvious to me. On one level it’s just a visual and tactile matter. I’ve stopped just hearing the myth and started to see it. There are fingers, parts of arms, sexual parts, parts of feet, there, on the ground, bleeding, in a clear space amongst the trees, and I hear the screams as it was done, clench my mind at the agony of it. Orpheus is always with us – surfaces (those LA Times photographs again) in complex and challenging ways.

I’ve started to see Eurydice differently also. The underworld is everywhere. Under the car you might be standing next to. Under those sheets. Under that piece of wet newspaper in the gutter there. Under that woman’s or that man’s foot. Under that tree. Under those leaves. And Eurydice, too, is everywhere. In that dream you had last night. Under this or that piece of consciousness. In that thing you have only just remembered about your father’s silence. Under the words of that poem. Under the things that, in a painting, grab and hold your attention. The Other of our systems of thought and categorisation. Thetrace behind and about the individual word. The shadow behind that actor’s shoulder – you put in the name (Gregory Peck? Ava Gardner?) – in this or that movie. Just as the dismemberment of Orpheus, whatever else it means, also means that Orpheus, the god, the divine spirit of poetry – but no, I mean the bloody, dismembered parts of him, and the raw immediacy of them – is spread through the world, so Eurydice, the woman he had tried to bring back from the underworld, is also everywhere.

There’s something about the task of poetry here perhaps, or one of them, there-membering of Orpheus, the perceiving and the gathering of parts and the assembling them into simulacra, copies without originals, of the dark wholenesses that we find otherwise impossible, especially in our postmodern era.  And the place where, according to the myth, Orpheus was torn apart was called Zone, in Thrace. That’s the point. And Apollinaire’s poem ‘Zone’, about the place where Orpheus’ bloody parts are scattered, the place still ringing with his agonised cries, is Paris, is the modern city, is Sydney. And I call Toby the Apollinaire of Avalon, a little facetiously, perhaps, because rarely have I found a poet in my immediate vicinity who seems quite so much, in the images he assembles – draws from this city – like a gatherer of small pieces of sometimes bloodied, Orphic, singing dark.
It’s appropriate, absolutely harmonic and to the point, that Rawshock is centered about a sequence based upon the Rorschach ink-blot tests which made their percipients draw upon – try to draw up – the Eurydice in themselves. In this beautiful edition, in which you can see Toby’s ink-blot-shaped poems beside the Rorschach blots themselves, you can see how Toby pixilates those blots with words – turns them into words, or, rather, images, in a way that makes them at once as metapoetic as they are deeply poetic. I could use almost any of Toby’s poems to demonstrate the points I have been making, but look at these lines, from the first of the Rawshock sequence, Eurydice speaking to Orpheus:

I could develop that a little. I could also talk about the sources or resonances of Toby’s spatial arrangements – his refreshing use of the page – in Apollinaire’s Calligrammes and, behind them, in Mallarmé’s Un Coup de Dés. And behind that, of course, I could talk about Rimbaud, and then try to pull all these things together. But this is probably enough. I don’t have to hold these things together. Toby’s poems hold them together. I invite you now to purchase them, if you haven’t already done so, and to take them with you – to a suitable bar or café, first, to talk until dark – it is April 22nd, 2012, after all, probably the anniversary of some important thing or another (the Battle of Catania, perhaps, or the birthday of Vladimir Ilich Lenin) – and then to stroll out with them – the poems, that is – into the Sydney night. The conversation you have with them, I assure you, will be memorable.